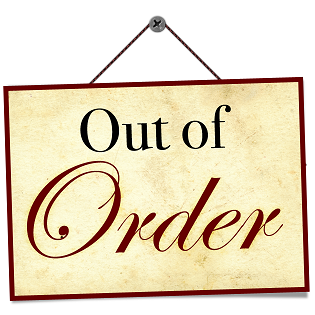 Tonight’s meeting was ruled to be “out of order” due to procedural violations.

The council is largely governed by Robert’s Rules of Order. No, not my rules, the other Robert’s. (http://www.rulesonline.com/)

Point of order #1
The meeting was called to order and the first agenda item, (CDBG funding) was read. Council member Aubin made a point of order. He stated that there had been multiple public meetings and by motion he had closed the public hearing portion at the previous council session. This means council member Aubin had confirmed by voice at a previous meeting that the public hearing process was closed. It was then suggested that a motion to reconsider was required citing the need to follow the rules. The mayor asked if there was a motion to reconsider.

Now, for those of you playing the home game, this is where it gets fun.

Seeing a group of people behind me prepared to speak, I made the motion to reconsider.

Point of order #2a
Council member Aubin voiced a point of order, noting that as a newly-sworn member of council that I was not on the prevailing side of the vote because I had not in fact been a member of the council when the vote was taken. He was correct and my motion was withdrawn. Council member Williams made the motion instead, and I seconded.

Point of order #2b
Council member Aubin then refuted his initial implication that a motion to consider would be useful in this case, as he cited the rule that states “The motion to reconsider allows the assembly to change its mind about how the membership voted on a motion. In a group whose meetings last one day, members must make this motion at the same meeting in which the vote was taken. In conventions or sessions of more than one day, members can reconsider a motion voted on at one meeting the next day. If time has run out on the motion to reconsider, members can offer the motion to rescind the action or amend something previously adopted (explained later in this chapter). If the motion was defeated at the previous meeting, a member can renew the motion by reintroducing it as new business.”

This was also procedurally correct.

The last option was to suspend the rules to allow for discussion of the issue. Council member Williams made the motion, however no council member seconded the motion. The item for consideration was removed from the table due to being out of order, and the meeting was summarily ended.

A motion to suspend the rules is a last ditch effort to address an issue. It is usually used when the group has accidentally backed themselves into a procedural corner and needs to hack their way through the rules and back to sanity. It is sometimes also used to silence the opposition and move forward with an issue despite legitimate complaints. While I felt it was important to get constituents up to the mic, I felt that a motion to suspend the rules went beyond what was appropriate for the issue on the table. In this particular case, it would have been used solely to bypass the rules that were appropriately followed by the previous council. I declined to second the motion.

And that, as they say, was that.

I hated to see people left sitting, unable to voice their opinions to the council. And while there were other opportunities to speak at previous meetings, you as constituents do have a reasonable expectation that if we announce a public meeting you will have a chance to participate in it. I’ll work with the mayor and council to try and prevent us from going down this path again.