People want to get from Brand & Naaman school road to the other side of highway 78. To accomplish that, we provide one lane, a long light and a railroad track. This causes backups from 78 all the way back to Brand during rush hour on most nights. Adding in seasonal traffic from the convention center, high school (and soon, career center) makes it a daily nightmare.

Why are we in this mess?

When the 190 / Hwy 78 intersection was rebuilt, the eastbound frontage road exit ramp was built as a toll exit instead of a free exit (green blocks). There’s no contiguous frontage road along 190, so all of the traffic is funneled into the Naaman School road corridor (red blocks). 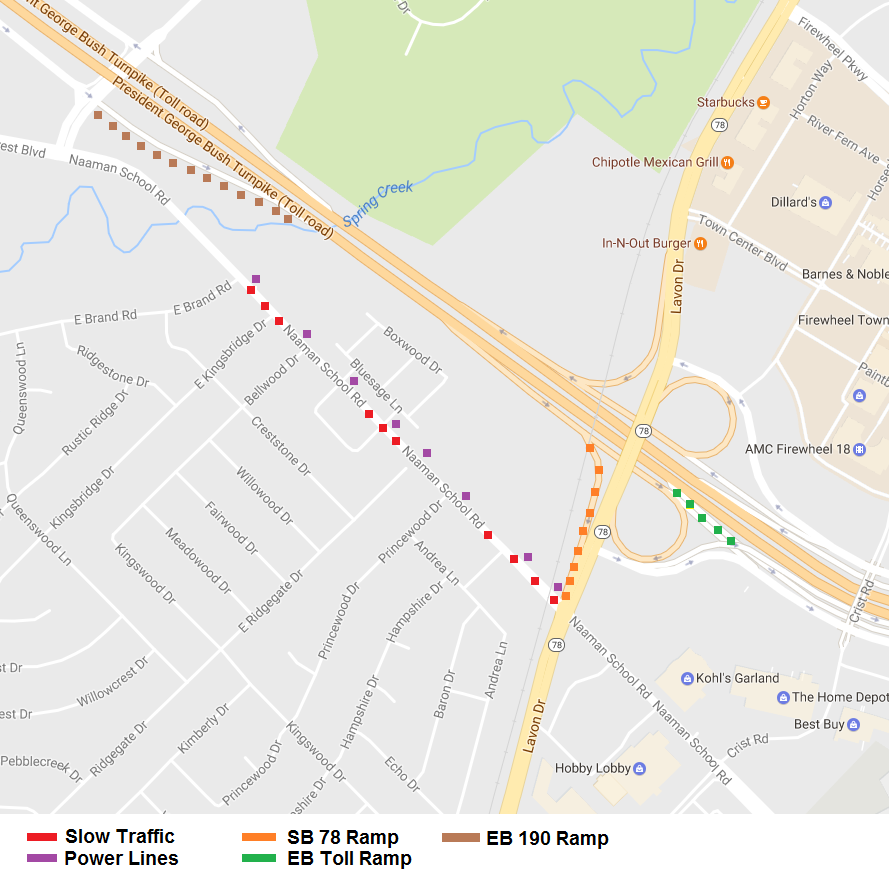 Who can fix it?

What are the possible solutions?

Barring a large infusion of cash from the county, we have a few options to consider:

1) Widening the Road – North
There is a possibility that we could either move or bury the power lines (purple blocks) along Naaman School Rd. This is costly. For this length of road, my best estimate is that it would run around $2M just to bury the single phase lines on the lower poles. This doesn’t even include the high tension lines that would be much more expensive. Once those lines were moved, we could work with property owners along the route to expand the street into a full 3 lane road with a central reversible through/turn lane. This is easily the most expensive option.

2) Widening the Road – South
We can wait however many years are required to very slowly buy up property on the south side of the road. We’d not only have to move the storm ditch that currently exists on the south side, but to keep property values up and through traffic down, we would need to reconstruct the dead ends and circles that exist for neighborhoods today. This fix could take generations and justifiably generate a large amount of opposition.

3) Diverting Neighborhood Traffic
To reduce overall load on Naaman School Road, we could possibly introduce a new outlet for the neighborhood that crosses the tracks and lets out onto SH 78. This is a bad idea for several reasons. First, there is only one candidate location, and it is in the middle of a neighborhood in a cul-de-sac. If I were a property owner in that immediate area, I’d be furious at the idea. However, even if that was proposed and passed, the railroads have indicated that they are not at all interested in another crossing along 78 and it would be a waste of our time to attempt it. Additionally, we’d slow down southbound traffic by introducing another light on 78. In the interest in maintaining the peace and quiet that the property owners bought and paid for when they moved in, I would vote against this idea. This also does not guarantee that the neighborhood would have the ability to easily go eastbound once they reach 78.

4) Five Points
To encourage traffic to use the 190 on-ramp at Brand road (orange blocks), we could turn the exit ramp onto SH78 into the 5th point of a 5 points style traffic light. This would allow southbound traffic on 78 to finally turn right onto Naaman School Rd, and allow southbound 78 ramp traffic to turn east across SH78. While this might seem like a good idea, it doesn’t actually fix the problem. The issue is that the same number of cars are traversing the same intersection, albeit from a different direction. Traffic is pretty bad on the southbound off-ramp already during rush hour, so I believe we’d just move the problem around. Additionally, we’d have to lengthen the light cycle at 78/Naaman to handle five directions, and introduce a new stream of traffic from cars turning westbound.

5) Creating a Truly Free Frontage Road
The best answer I’ve come up with so far is to move cars off of the over-utilized section of road and onto the under-utilized portion. I think we can all agree that having a tolled frontage road makes no sense. Our mission should be to engage the NTTA and determine a buyout price for the exit. This would shift eastbound traffic off of Naaman School Road and onto the frontage area where it belongs, and take pressure off of both Naaman and 78. Additionally, it would give more traffic to the cluster of businesses between Crist Rd and Firewheel Pkwy.

Buying out the tolled exit will cost money, certainly. But instead of rerouting a mile of power lines, buying out property owners that don’t necessarily want to move, rerouting traffic through neighborhoods, creating new railroad crossings or creating a traffic signaling nightmare… well, all this requires is a check made out to the NTTA and the flip of the ‘off’ switch on their toll plaza. It takes cars out of the neighborhood, reducing noise and allowing home owners better use of Naaman School Rd. Depending on the NTTA’s willingness to work with us and our ability to finance this type of option, we could see traffic relief within a year if not sooner. I think that this is the type of money-saving, common sense solution that we can all get behind.

What do you think? Let me know at robertjsmithtx@gmail.com !

Do you like what you’ve read? Vote Robert John Smith for Garland City Council, May 6th 2017.